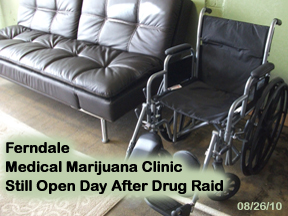 “We aren’t going anywhere.”  The words said strongly by the silver-haired matriarch of Clinical Relief less than 24 hours after being forced face down on the floor in handcuffs by drug enforcement officers with ski masks and guns.

70-year-old Barbara Agro of Lake Orion was working the reception desk of Clinical Relief (362 Hilton) on Wednesday, Aug. 25, 2010 at about 6:30 pm when Oakland County Narcotics agents raided the medical marijuana facility, confiscating all of the clinics medicinal supply, confidential patient records, some computers, telephone equipment, and the modem for the security cameras.  They even took the press clippings and thank you letters and cards that were tacked up on the bulletin board in the waiting room. 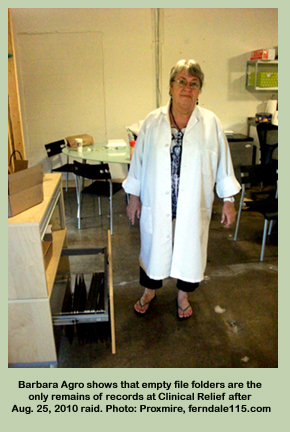 Three employees were arrested on site.  They are currently being held, but have not yet been charged.  A press conference this afternoon revealed that fifteen arrests were made in connection with Clinical Relief and a Waterford business called Everybody’s Café where a compassion club meets.  There were raids on homes associated with the businesses, including Clinical Relief proprietor Nick Agro’s home in Royal Oak and his mother, Barbara Agro’s home in Lake Orion.  Police say people at the facilities were selling marijuana outside the scope of what the law permits for medicinal marijuana patients, including selling to patients without medical marijuana cards.  The Department can hold prisoners for up to 72 hours without filing charges, although drug-related charges are expected to be filed soon.

Barbara Agro and another employee who had been present during the raid returned to work today, referring patients to other legally-certified suppliers and setting up doctor referral appointments for their clinic.  The clinic’s doctor was not in the building at the time of the raid.  He will begin seeing patients again next week.

“They took all of our records, so for now it’s like starting from day one,” Agro said.  “They took everything but the furniture.  But we’ll bounce back.

‘What we are most worried about is our patients who need medicine that they can’t get. We give them referrals, but I know some people will be too afraid to go.  They’re terrified that they’ll get raided now that the police have their information.  You know, our patients aren’t criminals.  Many have never broken the law in their life, and this is a medicine that they need, and want to get from a medical doctor.  They’d rather have elderly cancer patients and people in wheelchairs go try to buy drugs off the street?  I know there are people leaving here today without hope, because they won’t have the medicine that they need to get through day to day.”

In addition to the employees, Agro says three sick patients were handcuffed and forced to lie face down on the ground with guns to their heads. Another woman who had only been on premises for a consultation “was scared out of her mind and crying” as police “cornered her coming down the stairs,” said the other employee, who asked to remain anonymous.  They and their belongings were searched, and they were ultimately released.

As an afterthought, Agro added “I think that’s what they want.  They want to find a clean place like us and try and use us to create new law; see what can they get away with on a place that is being run in a clinical, legitimate way.  We’re one of the first and they’re looking for a test.”

“Just in time for it to go to court before the November elections,” added a patient, who was one of many that stopped in to see if everything was okay.  Police confiscated the phone system, so patients who heard about the raid on the news have been unable to call for more information.  The clinic typically serves between 50-80 patients a day.  Many have been stopping by in person to show support and to get referrals.

The clinic opened three months ago, shortly before The City of Ferndale enacted a temporary moratorium on medical marijuana facilities.  Just Monday night Council repealed the moratorium and set in place zoning ordinances for new businesses.  The ordinances require a special use permit, and limit the areas of the city where such facilities can open.

Hilton Road is not included in the permissible zoning areas, however Clinical Relief is allowed to remain open because they are “grandfathered in,” i.e. they opened before the restrictions were put in place.

“This is where we want to be.  Not up on Woodward where we’d be mixed in with head shops and cafes or other ‘pothead’ type places.  This is a medical clinic and we take it very seriously,” Agro said.  She said that customers go up to 84 years of age, and include doctors, professors, lawyers and teachers.  Many are cancer patients.  Some are terminally ill.  Many are wheelchair users. “If you could see what I see, you’d understand why we do what we do. It’s not like people think.”

Clinical Relief is located at 362 Hilton Road, and their website is www.clinicalrelief.com.  The Oakland County Sheriff’s Department website is http://www.oakgov.com/sheriff/news/.